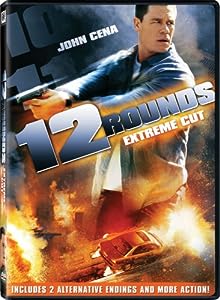 In ’12 Rounds,’ Danny Fisher (John Cena) is a New Orleans Police Detective with a live-in fiancée. Fisher stops a brilliant Irish terrorist who is sought by the FBI when the terrorist tries to escape with a multi-million dollar heist. The criminal’s girlfriend drives the getaway car for him, but she is hit and killed by a car when they try to flee on foot. This sets the stage for an action-drama based upon a game of revenge.

After escaping from prison, criminal mastermind and arms dealer Miles Jackson seeks his revenge by kidnapping Fisher’s fiancée and setting up a series of near-impossible mental and physical puzzles and tasks 12 Rounds that Fisher must somehow complete to save the life of his fiancée. Each task comes with a timeclock, usually involving explosives, that must be dealt with as Fisher seeks the next clue. With the clock ticking, Fisher must overcome each obstacle as he races through The Big Easy trying to complete each dangerous task, hoping he can save his fiancée at the end of the 12 Rounds.

I did not expect much from a movie produced by WWE Studios, but I was pleasantly surprised. ’12 Rounds’ will never make a top ten list, but it was not a bad flick for those who enjoy the kind of rip-roaring action films that follow the forumula so popular with 21st century males: fast cars, macho heros, lots of gun fire, kidnapping, murder and mayhem.

’12 Rounds’ unrated ‘Extreme Cut’ is full of action, mediocre but tolerable acting, plots twists, and more action. It is fast-paced, heavy on violence, and not for children.