A Christian Take on Twilight – Book and Movie Review

‘Twilight,’ the uber-popular book (and movie) by Mormon mom Stephenie Meyer, is that rare phenomena – a sexy book (and now a movie) with spiritual themes including virtue, conscience, and good, old-fashioned morals and manners. Even though the series has now run its course, the books and movies are still popular. Something about them resonates with readers and viewers.

However, some religious reviewers find fault with the romantic lead character believing fictitious vampires must always be demonic creatures. This article will take a look at the Twilight saga books and movies from an opposing Christian perspective.

If you enjoy old Bronte sisters and Jane Austin novels about brooding, noble, self-sacrificing heroes, Twilight is for you. Twilight’s teenage vampire Edward Cullen is an unexpected delight, a breathtakingly handsome super-hero who COULD easily be a demonic villain but makes a conscious decision to put aside his powerful drives and urges to be a better, more ‘human’ being. This is what makes Edward the hero in Twilight – his innate sense of right and wrong, his concern for the state of Bella’s soul and his own, and his willingness to pursue what is right, even if he suffers in doing so.

Vampire Edward Cullen has been around for over 100 years, but he is forever 17 (and played in the upcoming Twilight movie by 22-year-old Robert Pattinson). He falls in love with 17-year-old Bella Swan while battling his overwhelming urge to kill her and drink her scintillating blood which calls to him in a powerful way.

Bella Swan (played by Kristen Stewart who really is 17) is ‘Everywoman’ – an average girl coming into her own, discovering her strengths and inner beauty through the eyes of the man, in this case a vampire, who loves her. 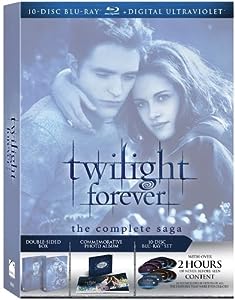 Many Christians have claimed the books and movie are too dark, Gothic, and even demonic for Christians, but I beg to differ. Twilight is all about exercising free will to chose to turn from darkness and make the often difficult decision to put aside one’s baser instincts and desires in search of what is noble, pure and right.

In Twilight, one could easily substitute the words ‘drink her blood’ and ‘change her into a vampire’ with ‘have sex with her’ and the end result would be the same — Edward overcomes ALL his baser desires to protect Bella’s life, her virtue, and her soul. Edward has learned a lesson few humans are willing to comprehend anymore — there are some things more precious than gratification. And even though as a predator Edward is equipped with all the seductive qualities to trap his prey, whether as food or for sexual pleasure, Edward rises above each temptation throughout the book and the series. Edward Cullen chooses temperance and abstinence above gratification.

Twilight Comparable to Other Christian Fantasy

Christian viewers and readers will find much to appreciate in Twilight if they will think of it more in line with Christian fantasy writers like C.S. Lewis and J.R.R. Tolkien and less in line with other vampire novels. Twilight is an action-packed thriller which should appeal to anyone who loves a good super-hero as well as a ruthless villain. My one complaint is Twilight is a little too mature for young teens, especially the movie version.