Pulp Fiction was indubitably one of cult director Quentin Tarantinos well known works of cinematic storytelling, coming after the equally acclaimed release of Reservoir Dogs in 1992. Filled with such provocative scenes done by a stellar cast including Samuel L. Jackson, John Travolta and Uma Thurman, that I can still call to memory most of them, Pulp Fiction is definitely deserving of its cult classic status among movie enthusiasts everywhere.

While there are tons of ways one can show ones love for a movie, I do feel that a T-shirt works best in that department, and so Ive included below a short list of Pulp Fiction-inspired T-Shirt designs for the consideration of all you fans out there. 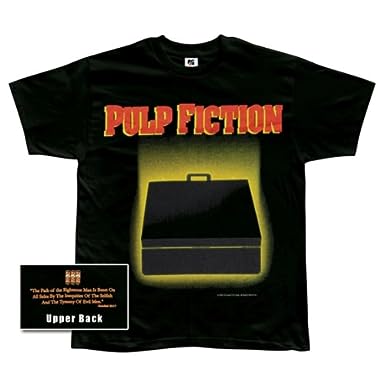 I bought this shirt last year off eBay, and its exactly as described in the image provided. The words Pulp Fiction are plastered on the shirtfront in bold lettering above the notorious briefcase as seen opened by John Travoltas character in the movie, Vincent Vega, whereas printed on the upper back of the shirt is the equally notorious Ezekiel 25:17 quote uttered twice by Samuel L. Jacksons character throughout the movie, Jules Winnfield, threateningly so in both occasions. Above the quote is the combination lock of the aforementioned briefcase showing its blasphemous numerical combination to anyone behind you. All things considered, its a T-shirt design containing all noteworthy references to the second scene in the movie.

The Briefcase T-shirt is available as well on Amazon, where you can choose from three different sizes: Medium, Large, X-Large. 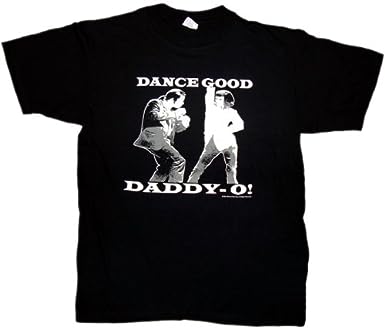 The T-Shirt depicts one of Pulp Fictions more memorable scenes in black and white, where Vincent Vega and Mia Wallace (played by Uma Thurman) took it to the dance floor. Coupled with the words Pulp Fiction written on the back of the shirt in white lettering, the overall design does seem a bit monotonous, despite the shirtfront depicting a somewhat lively moment in the movie. Then again, its the only design I could find on Amazon that references any other Pulp Fiction scene without Samuel L. Jackson in it. The T-Shirt comes in two different sizes: X-Large and XX-Large.