The territory of Bergamo and its province lies in the center of Lombardy. Around the whole region, you can witness the process of modernization and renovation.

Nevertheless, the rich historical and cultural heritage of the region has been carefully preserved there. And now a variety of natural landscapes are surrounding it. In Bergamo you can feel truly cozy, calm, and relaxed.

The history of Bergamo abounds in various events that have been reflected in the architecture of its streets and squares.
And now you are invited to plunge for a while into the special atmosphere of the town by checking out its most tremendous architectural beauties. 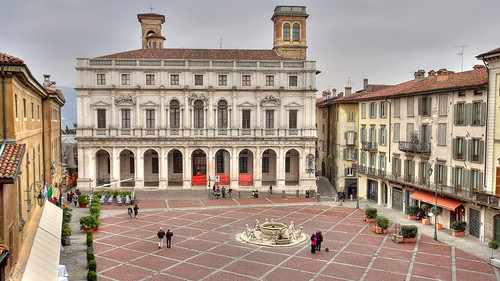 This old square is the midpoint and the main symbol of Bergamo relating to the era of Renaissance. It includes the elegant town hall and the city library.

There is also a new town hall, which currently houses Angelo Mai library. The facade of Palazzo del Podesta, constructed by Donato Bramante and the grand Torre Civica (Tower of citizens) also overlook the square. The center of Piazza Vecchia is decorated by XVIII century fountain. 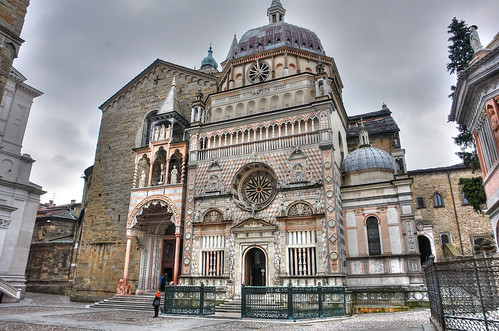 established in the XII century, but further it was rebuilt and expanded. What you definitely have to see in Bergamo is the portals leading into the interior: the northern portal of the White Lions, overlooking the cathedral adjacent to the Piazza Vecchia, and the southern portal of the Red Lions.

However, the baroque interiors of Santa Maria Maggiore are also worth the attention. On one of its walls you can see XIV century frescoes and in one of its chapels the famous native of Bergamo  composer Gaetano Donizetti was buried.

3. Duomo di Bergamo
Bergamo Cathedral was founded in the late XVII century, and has subsequently undergone several reconstructions. The Baptistery itself represents a small octagonal building with a fence of the wrought iron, topped with the columns of red Verona marble.
Originally, the Baptistery was in the central nave of Santa Maria Maggiore, but in 1650 it was demolished and reconstructed only in the late XIX century. Afterwards the building was placed close to the cathedral.

4. Bergamo city walls
The picturesque city walls were constructed to perform purely a practical function and were the part of the fortifications. Their construction was started in 1561, when Bergamo was under the domination of Venice.
Local residents were strongly against the construction of the walls, because over 100 houses and several churches had to be demolished for that.

Porta S. Agostino is the eastern gate of the city, built in 1575 of gray sandstone. One of the busiest roads leading to the upper town was lying through this gate. 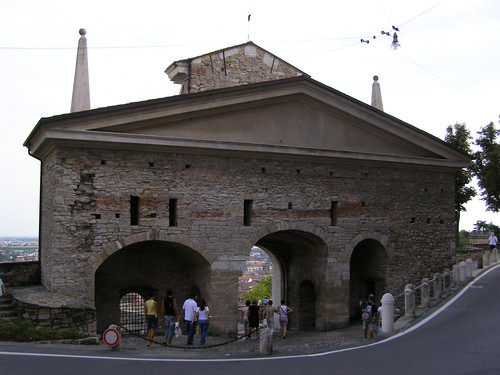 Porta S. Giacomo was built at one time with Porta S. Agostino. It was made of marble and leads from one part of the town to another. The gate derived its name from the church located nearby, but it was destroyed because of the construction of the walls.
Porta S. Alessandro was named in the honor of Bergamo patron St. Alexander. Once a cathedral of the IV century used to be there, which, unfortunately, was demolished in 1561, and now only a single column reminds of it. You can see it by passing through the gate and going up a bit along the street.
Porta San Lorenzo or Porta Garibaldi is the northern gate of Bergamo, and the oldest one among the four gates. In 1859 Garibaldi entered the city with his soldiers exactly through this gate.

To see all these gates you will need to take a trip from the lower part to the upper part of the town. You can use for the trip either a local bus or to rent a cheap car, having made an advance reservation using http://italy.rentalcars24h.com/bergamo-airport.

5. Church of Santa Maria Immacolata delle Grazie
The emerald dome of the church stands almost in the center of the New Town, and this place is definitely worth to be seen.
This church is actually the first architectural ensemble that comes along the way of the tourists who arrive to the city and want to see the local sights. It emerged at the site of the former Franciscan monastery, but in the early XIX century the monastery fell into decay. More precisely, only two courtyards surrounded by galleries have remained of it. During the restoration work the courtyards were divided between the reconstructed monastery church and Bergamo bank.
Today the building is a majestic cathedral with a powerful portal and massive columns. Inside of the temple you can see centuries-old frescoes and various church utensils. 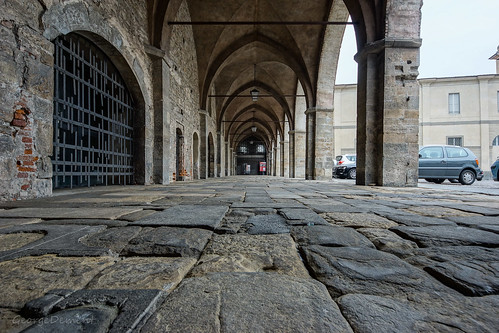 The XIV century Citadel was constructed in the west of Bergamo, on the hill of St. John. During the reign of Barnabo Visconti, characterized by the continuous wars and violent repressions against the Guelphs, the citadel was needed a lot.
The Citadel housed military protection, as well as a prison. Currently, the Archaeological Museum and the Museum of Natural Science are located inside of the Citadel.

As you see, in spite of its small size, Bergamo can offer its guests a wonderful cultural program. The city will strike you with its splendor and provide you with a lot of unforgettable emotions. Just dont forget to put a camera in your suitcase to capture all the beauty that will surround you!

Author Bio: Lily Berns enjoys life travelling and writing about interesting entertainment spots while visiting different countries. She tries to find some special ideas for vacation in Italy with rentalcars24h.com