Board games can now help preschoolers learn about cooperation not just competition.

Most children’s board and card games are based upon competition. The goal is to win (and avoid losing). These types of games are certainly not harmful to children – in fact children may learn things like sportsmanship from playing them. But there is an alternative type of game that can be a nice change from the competitive style of play.

Cooperative games, such as

focus upon fun, participation and solving a challenge together rather than defeating other players. The non-competitive side of these games can encourage children to learn team work skills. Although children often need some help when they first play a cooperative 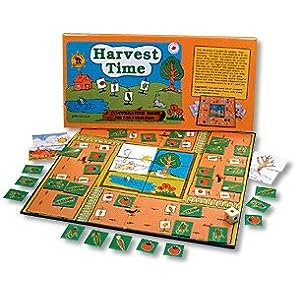 game to work as a team as they often repeat the competitive style they are used to with other board games.

Rather than competing against each other in cooperative board games children need to ‘beat the clock’. These games have a fun ‘timer’ built within the game play. The aim of these games is to do something specific before their time runs out. The goal of Harvest Time is to harvest the garden vegetables (peas, corn, carrots and tomatoes) before winter comes. The game play is designed so players can help each other to beat the timer.

Cooperative games allow children to enjoy each other’s company as a team rather than as opposing forces. The games also seem to have rules that can be easily modified for younger children or those with special needs.

Our family has tried a number of cooperative board games and Harvest Time seems to be the all time favorite amongst the kids (even the older ones). It’s quick moving, does not require any reading so its great for preschoolers and kids seem to love collecting the vegetable cards (which is interesting as the kids who ask to play this game the most aren’t exactly vegetable fans when it comes to dinner). There are also some other cooperative games that have been popular with our family, although not as much as harvest time. 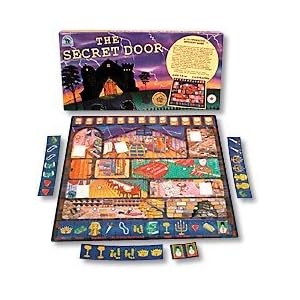 This game is actually my favorite of all the cooperative games we have bought. Unfortunately though I don’t get to play this game as much as Harvest Time, unless I was to play alone (which you can do very easily). The Secret Door is a memory game based in a mansion which has a Cluedo type style to it. Although in this game the goal is to work out and correctly guess which treasure is hidden behind the secret door. Again although each child has their own turn they can help each other as the aim of the game is to beat the built in timer. There is no reading involved in this game so as long as there is an older child or adult to play Secret Door with there is no reason why preschoolers can’t play. 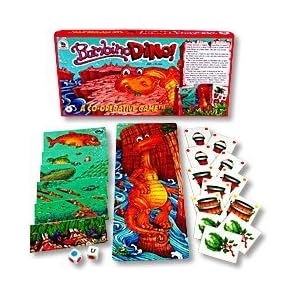 This is a great game that does not require any reading. In Bambino Dino players work together to save a baby dinosaur. Preschool children love this game and it makes a great first board game. Although I have noticed as children grow older they ask to play this game less and less often. Harvest Time on the other hand seems to remain popular. Again I’m still wondering why children who don’t like eating vegetables love a game about vegetables so much.