In this current state of economy, it’s no surprise why so many people look for cheap paintball guns for sale. Fortunately, there are plenty of affordable markers available, both new and used, so you do not have to search very hard to come across a good selection. The average price of paintball guns is around three or four hundred dollars, so any markers under $200 are usually considered to be cheap. In this article we will be discussing some really easy ways on how to find the best markers at an affordable, inexpensive price, and also provide you with two of the top paintball guns for sale under $200 and $100. After checking out all of this useful information, you will see just how easy it can be to get a good marker even when you are on a budget. 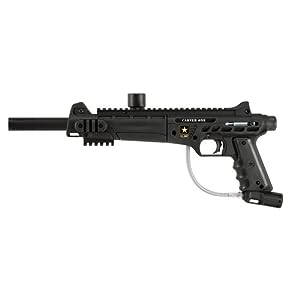 Tippmann U.S. Army Carver One – For those of you looking for a nice, military-style firearm, this Tippmann is ideal. They are built with a durable and reliable 100% aluminum die cast receiver, including a heavy-duty stainless steel braided gas line with a sleek matte black finish. The US Army Carver Ones are definitely some amazing cheap semi-automatic paintball guns, as they also feature a proven, high-performance in-line bolt system for the .68 calibur barrel with built-in foregrip, sling mounts and sights, as well as four Picatinny rails. 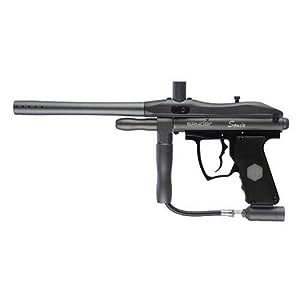 Kingman Spyder Sonix – This is not the most common brand name when it comes to affordable paintball markers, but they are easily some of the most sought-after thanks their excellent reputation. The Sonix is a really good cheap Spyder paintball gun for sale under $100 because it comes with features that you do not often see in any other discount markers. For example, they have an ergonomically designed high-impact polymer trigger frame, a tool-free striker plug, and a threaded clamping feedneck. 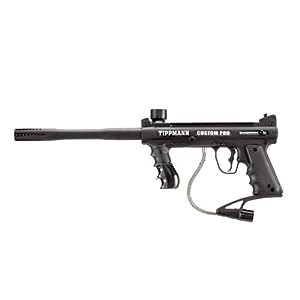 Tippmann 98 Custom Pro Basic w/ A.C.T. (Anti-Chop Technology) – It’s usually easier to come across models that are priced less than two hundred bucks without sacrificing too much quality, and the Tippmann 98 Custom Pro is proof of this as they have been extremely popular for many years. This particular style features Anti-Chop Technology and is a fully-customizable .68-caliber semi-automatic with an 11-inch barrel. These cheap Tippmann paintball guns also come with a removable front grip, an 8 BPS firing rate, a double trigger and a 200-round hopper. 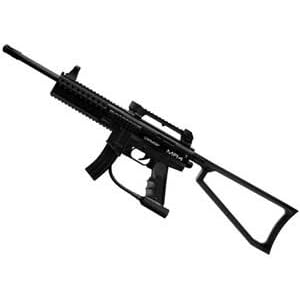 Kingman Spyder MR4 Military Sims Semi-Auto – This is probably the nicest model available for this price threshold and it should not be any surprise to see Kingman listed yet again. The MR4 Military Sims features the patent-pending EKO Valve System which allows for superior air efficiency, a multipile picatinny rail-mounting system, a magazine-style foregrip and a 12-inch micro-ported barrel with muzzle break. Considering all of these cool components, these Spyder markers are among the top cheap paintball guns for sale in 2012, and will likely remain as such for several years to come.

How to Find the Best Discount Paintball Guns for Sale

As you have probably noticed by now, it is pretty difficult to get a good marker for an extremely low price unless you buy second-hand or refurbished models. While this may not sounds so appealing to you on the surface, they are actually decent investments as long as you shop at a reputable outlet such as Amazon, Overstock or sometimes eBay. It is probably more tempting for you to purchase used paintball guns from a local private seller because it’s easier than waiting for the mail to arrive and more affordable in most instances due to the lack of shipping and handling fees. However, you can’t always trust the average joes from the newspaper or Craigslist, so it’s often wiser to shop online on a website that has a reputation to protect.

You can find tons of discount paintball markers from a wide range of online outlets, and there are sales every single day, all year-round. With so many options to pick between and compare, it makes it so much easier to get a really good deal on cheap paintball guns for sale.