The people at the Walt Disney company decided it was time to redo their classic children’s movie ‘Escape to Witch Mountain,’ so they picked Dwayne Jonson and two up-and-coming young stars, jazzed up the plot, and ‘re-imagined’ the story. Did they succeed? Read on for my take.

The ‘Race to Witch Mountain’ Three-Disc Edition: Blu-ray/DVD/Digital Copy retails for $44.99 but can be found for much less online. The Disney movie stars Dwayne Johnson, is rated PG and is 99 minutes long. 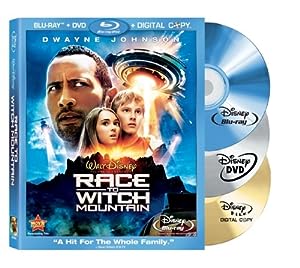 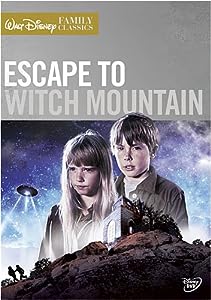 ‘Race to Witch Mountain’ begins when a spacecraft crash-lands on Earth and the two teenage aliens escape capture by Major Henry Burke (Ciaran Hinds) and his military team. Alien kids Sara and Seth (Robb and Ludwig) find Jack Bruno (Dwayne Johnson), a former criminal working as a Las Vegas cab driver, and ask him to take them out to the middle of nowhere. On the way there, they are pursued by Major Henry Burke, and the children reveal their true identities to a skeptical Bruno.

After seeing display’s of the teen’s powers, Bruno comes to believe them. Ultimately he grows fond of and protective of his young alien charges. He must face his own fears and his past to save them from both the military and an alien assassin.

For a kid’s movie, ‘Race to Witch Mountain’ isn’t bad. Although it elicited chuckles on the talk-show and TV movie review circuits when it was billed as a ‘re-imagining’ of the 1975 movie classic, ‘Escape to Witch Mountain’ has its good points. Sure, it is implausible and it has that ‘been there, done’ feel to it, because it closely follows the basic plot line of several similar movies. However, on the plus side, there is the ever-present charisma of Dwayne ‘The Rock’ Johnson, and the likeability of the alien kids, played by AnnaSophia Robb as Sara and Alexander Ludwig as Seth.

Robb is a talented little actress. I have been a fan of hers since 2007’s ‘Bridge to Terabithia.’ Alexander Ludwig turned in a solid performance, too. And no matter how silly his roles may have sometimes been, I have never seen Dwayne Johnson in a film where he wasn’t bigger than life, and I like that in an action movie character.

As a ‘Lord of the Rings fan,’ I have to point out Sala Baker (Sauron, Lurtz, more) was also in ‘Race to Witch Mountain’ as a stuntman.

‘Re-imagining’ may just be a clever word for ‘knock-off,’ but if imitation is the sincerest form of flattery, ‘Race to Witch Mountain’ delivers, even working original Witch Mountain stars Kim Richards and Ike Eissinmann in with cameo appearances. Richards appears as a waitress and Eisenmann turns in a particularly noteworthy appearance as a small-town sheriff.

‘Race to Witch Mountain’ will appeal to children and young teens and is a movie the entire family can enjoy together.