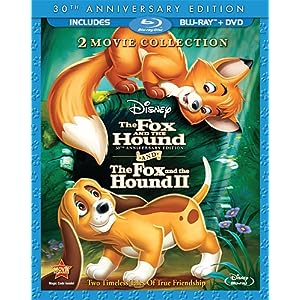 The Fox and the Hound 30th Anniversary Edition

First released by Walt Disney Productions in 1981, ‘The Fox and the Hound’ is the 24th film in the Walt Disney Animated Classics series. The 30th Anniversary Edition releases on August 9th on Blu-Ray and DVD.

The Fox and the Hound Story

A baby fox is hidden by his mother right before she is shot. The fox kit is cared for by a kindly widow woman (Jeanette Nolan) whose neighbor has just purchased a baby hound. The woman, calls her toddler fox ‘Tod’ (‘tod’ is also another name for a male fox) and the hound pup is called Copper. The kit and the puppy meet and become fast friends which angers Copper’s owner, Amos Slade (Jack Albertson).

Slade takes his puppy on a lengthy hunting trip where Copper grows up hunting all kinds of animals, including foxes, but Tod is still eager to reunite with his old friend. Tod’s feelings are crushed when Copper tells him their friendship is over. However, Copper lets his old friend escape the first time he is sent to hunt the fox, but Copper’s heart is hardened when his friend Chief is seriously injured on the hunt. Slade’s anger causes the widow to take her beloved Tod to a game preserve where she thinks the fox will be safe, but Slade and Copper have other plans for the fox.

Full of charm and whimsey as well as a good lessons about friendship, ‘The Fox and the Hound’ boasts a stellar cast of voice talent including Corey Feldman as Young Copper, Kurt Russell as older Copper, Mickey Rooney is older Tod, Pearl Bailey as Big Mama, Pat Buttram as Chief and Sandy Duncan as Vixey, among others.

Thank you for reading this article and for sharing the link. If you enjoyed this article, please share the link. Please do not copy this article on websites, discussion boards, blogs, Facebook, or elsewhere. You might also enjoy reading: