Computers take over the world again in the action/thriller ‘Eagle Eye’ which released on DVD and Blu-ray in 2008. Starring Shia LaBeouf (‘Indiana Jones and the Kingdom of the Crystal Skull,’ ‘Disturbia,’ ‘Transformers’) as twins Jerry Damon Shaw and Ethan W. Shaw and Michelle Monaghan (‘Made of Honor,’ ‘Gone Baby Gone’) as single mother Rachel Holloman, two strangers are thrown together by mysterious telephone calls from an unknown female voice in ‘Eagle Eye.’

After his twin brother Ethan is killed in an automobile crash, Jerry Shaw stops by the ATM machine to discover a huge amount of money is now in his account. He returns home to find his apartment full of strange boxes, which he opens to discover weapons, arms, explosives and poisons. 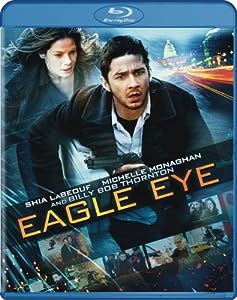 His phone rings and a female voice begins to issue instructions which lead him to Rachel. The mysterious voice threatens Jerry and Rachel and forces them into a series of increasingly dangerous situations, using the technology of everyday life to track and control their every move: cell phone, computers, video surveillance, satellites, and other automated systems.

Can Jerry and Rachel unravel the mystery, save Rachel’s son, and escape with their lives before the Declaration of Independence-spouting computer takes out the leaders of our country?

‘Eagle Eye’ is not a bad movie, but it falls short of being a good one. On the plus side, ‘Eagle Eye’ is an adrenaline rush in what amounts to one long chase scene where cars crash, police cars are crushed, and many, many things go boom, so if you enjoy edge-of-your-seat tension (Steven Spielberg served as executive producer), ‘Eagle Eye’ provides some. Shia LaBeouf is becoming believable as a leading man, and fans of ‘Terminator’ and ‘I Robot ‘ will probably enjoy the sci-fi look at a national defense computer gone awry.

However, the ‘Eagle Eye’ story is derivative of several movies, and although Shia LaBeouf, Michelle Monaghan, and Billy Bob Thornton all provide some good moments on-screen, viewers are never fully engaged. Still, this is not a bad flick, and done without cussing or sexual content. There is some violence, and a disturbing scene where a man is fried by electrical wires, but most of the violence in the movie is both implied and hidden by explosions and crashes without gore. In spited of mild violence, ‘Eagle Eye’ is appropriate for teens who probably see worse on their video screens. 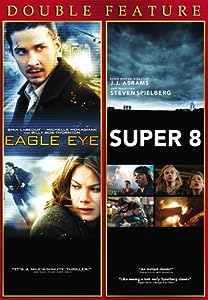 ‘Eagle Eye’ is also available paired with ‘Super 8’ in a double feature.