How New Diseases are Created

Years ago, no one had ever heard of PMS, which is short for ‘pre-menstrual syndrome.’ Nor had the term ‘attention deficit disorder’ become a household word.

If someone was simply shy, that was usually no cause for concern. People accepted it as a personality trait, rather than a ‘social phobia’ that needs to be treated with medication.

So, what’s going on?

Ray Moynihan and Alan Cassels attempt to explain, in their book called Selling Sickness How the World’s Biggest Pharmaceutical Companies are Turning Us All Into Patients. The pharmaceutical industry, they note, now generates $500 a year in sales.

The authors contend that drugs are no longer being marketed to the sick. (They do give the drug companies credit for making products that have saved the lives of those that need to take them.) Instead, they claim, there’s now an agenda to sell them to everyone, even those who aren’t running to their doctors with various complaints. They point out this practice is highly unethical, as drugs have side effects and these may be dangerous, or even deadly. With a healthy patient, it usually makes no sense to incur this additional risk.

People in other countries, they note, do not consume prescription drugs at the same rate as Americans, whom take a disproportionate number of pills. Even though we account for only 1 in every 20 people on the planet, we swallow 50 percent of the world’s prescriptions. 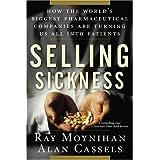 The authors of Selling Sickness were even able to garner a rare and candid interview with a Madison Avenue advertising guru, hired by the drug companies to come up with new ‘diseases’ in order to sell more drugs. Sometimes, he admitted, this involves putting a new spin on old conditions. Other times, though, slick advertising is used to create and name an entirely new condition.