How to Sharpen Those Chopstick Skills

For anyone whos struggled with using chopsticks as much as I have in the past, Im here to tell you that, yes, you can get better, and you will. Like with all things, it takes dedication and determination. Billions of people can do it, and so can you. Whether its your first time breaking those bamboo sticks apart or if your a seasoned veteran, there are still many ways to improve your abilities and expand the limits of what you thought possible. Yes, even with chopsticks.

When first attempting to use chopsticks, its important to note that they have to feel comfortable between your fingers. Most people will say that you have to hold them like you’re holding a pencil, but that isn’t always the clearest description. In the diagram below you will see the proper form from a first-person perspective. Note how the lower chopstick is resting idly between the thumb and the ring finger; this one is acting as your dining bedrock. It hardly moves and does little more than support the movements of the upper chopstick, which is the more difficult one to properly grasp. Ive seen people hold both around the middle, which is entirely detrimental to what you can do. As you can see in the picture, holding them from the ends actually allows for greater freedom of movement and a more balanced distribution of power from your fingers to the ends that touch down on the plate. With the proper hold, use your middle finger to press on the upper chopstick, and with that piece of steamed broccoli between the chopsticks, grip that food in a steel trap. Itll take practice, and you will most definitely drop something at some point, but it will get easier. Starting with larger kinds of food, work your way down to smaller cuisines, like rice and diced vegetables. Building your finger strength will make it much easier as well. Honestly, and I reiterate, the more you practice the easier it will become. 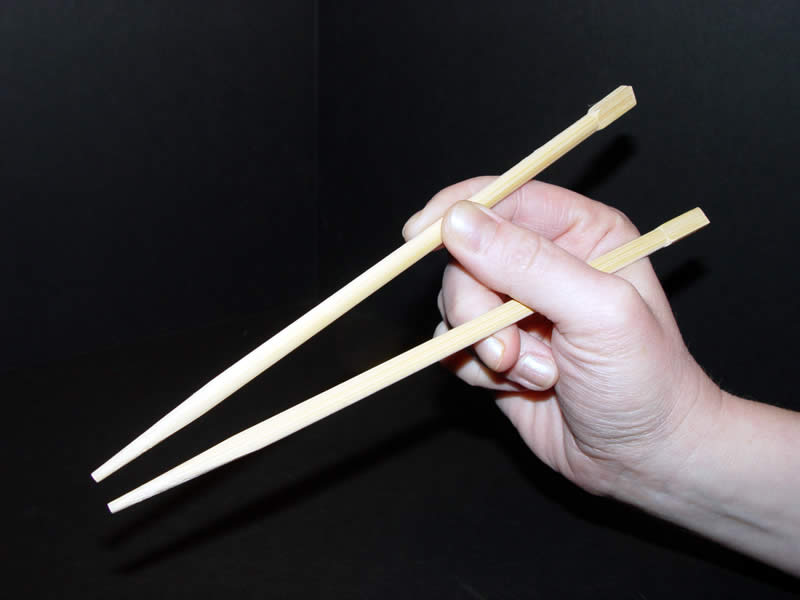 I recently tried this in a number of elementary school English classes I teach, and even the Japanese students struggle with this one. Its a simple, yet fantastically effective method to assess your own skill and actively improve. To begin, you will need a bunch of marbles in a bowl, chopsticks (depending on how many people are playing), and a bowl for each participant. The objective is simple: use chopsticks to pick up marbles and move them from the central bowl into your bowl, with the goal of moving more than your opponents. When all the marbles are gone, count how many you have and claim victory over your foes. It might seem simple, but those marbles are amazingly slick and love to slide out of any grasp or hold. To make this even more of a challenge, put a distance between the central marble bowl and the others, with the participants having to pick up a marble and walk (or run) to drop it into their bowl some few paces away. Marbles will hit the floor, and havoc will reign.

Other Customs (When in Japan)

The cultures that mainly use chopsticks each have their own governing rules and customs in how to properly use them. Admittedly, I have little experience with using chopsticks outside of Japan (aside from the Chinese or Korean restaurant) and can only speak for what Ive learned here. As you advance and become an accomplished wielder of the sticks, its important to note that chopsticks arent just a simple means for dining. For instance, one must never use chopsticks to pass food to someone elses chopsticks. This is because in traditional funeral ceremonies in Japan, after the body is cremated, the relatives will use chopsticks to pass the bones between each other as part of the ceremony, and to do this with anything else is considered offensively rude. Another example would be avoiding pointing to other people with the ends of your chopsticks as you hold them, as this is also considered quite rude. If you’re dining on a bowl of rice or on a dish that has a bed of rice, dont dip the ends of your chopsticks into the rice when resting; keep them stacked over the plate or on the table. Again, this is considered quite rude.

These are just a few things you can do to greatly improve your chopstick abilities and knowledge, and speaking from experience, the more you know the better position you will always be in. Anybody can do it, and I highly suggest that you do, seeing as it can open a surprisingly large number of opportunities to dine and engage with cultures in a way that might not be available to you otherwise. Happy dining!

The Warmlet — and Why You Need It

How to travel across Japan on any budget