Iron Man is the alter ego of Tony Stark, a billionaire playboy who happens to be a genius engineer and head of the military weapons and technology corporation known as Stark Industries.

For those of you who don’t know, Iron Man came about when Tony Stark was kidnapped and sustained a serious chest injury by terrorist. Their purpose was to get him to make a weapon of mass destruction, but instead he created the first Iron Man suit which he used to escape his captors.

He is also a founding member of the superhero team called the Avengers, which made their first appearance as a team in the 2008 movie. They will be together again in 2015 for the movie, Avengers: Age of Ultron.

For those of you who would like to dress as this superhero on Halloween, you will find many versions of his costume, but the one shown here is for adult men, is made of 100% Polyester, and can be hand washed.

This costume comes with the jumpsuit that has the 3D chest piece and the LED arc reactor. It also has the helmet which has an adjustable faceplate. 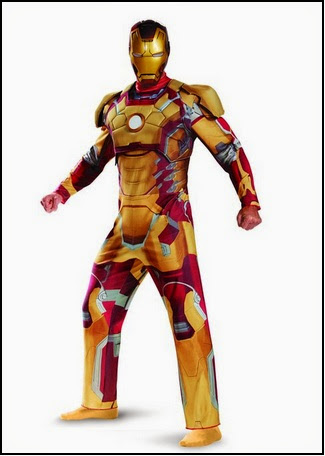 How Much Is This Costume
The price of this costume is between $36.25 to $62.99. However, it will depend on the size you purchase, and they run from X-large to XX-large. During my research I did not find any smaller sizes, but comments were made that the suit does run small.

Other Iron Man costumes you can purchase would be several versions for the boys, women, toddlers and infants. However, my research only revealed one costume type for girls.

And if you’re interested in the rest of the Avengers team, you can also purchase their costumes for the entire family. That would be Captain America, Thor, Hawkeye, the Hulk and Black Widow.

My Final Thoughts
First of all, most Halloween outfits are imported, so you can’t get away from that unless you make your own. In saying that, I want you to be aware that the quality on this and any other costume could always be an issue.

However, the comments that were made about this particular costume concerns the size running small, the quality of the material, the helmet being made of plastic and arriving damaged, the Velcro falling off the costume, and of course the arc reactor not lighting up.

As for the arc reactor not lighting up, it could be as simple as taking the back plate off the chest piece and removing the plastic tab that covers the on/off connection.