I wish I could say that what is going on in Ferguson was an isolated incident, but I am afraid that it is not. In the 1990’s, I lived in an urban area near Los Angeles, California. Though I didn’t live in South Central, L.A. I was more than close enough to experience the crisis that followed the beating of Rodney King. My employer, who was old enough to remember a previous set of riots in the 60’s, thought it would be wise to board up the windows at our work place. He said that it has happened before, and it will happen again. He was right. 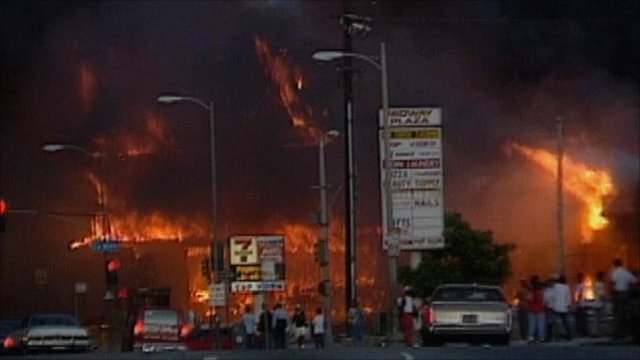 I was young at the time, and was unsure of what he meant until later that evening when a white truck driver was dragged from his vehicle and severely beaten. Not much different than the Grand Jury decision that was made last night in Ferguson, the events in Los Angeles were the result of the exoneration of a few officers who violated the civil rights of a single African American. They say that history is usually doomed to repeat itself, and I cannot think of a better example other than last night’s events.

Knowing what it is like to be in fear while my home town is literally burned to the ground around me, I can say that while I do not condone this type of violence, I have grown to understand much of it. I will however never understand how our Judicial system acts surprised whenever events like this occur. They seem quick to blame the people, while authorities who actually blame themselves are few and far in between. I was sad to see the destruction that last night’s protests lead to after the decision was passed down from the Grand Jury, but history has taught us time and time again that this is the type of thing that happens when the people go unheard. In fact, our nation was formed on the basis of people standing up for their own rights and freedoms.

I can’t help but think what the result would have been if Officer Wilson has been just some regular guy off the street. It would be safe to say that he would have been arrested and jailed on the spot, regardless of witness testimonies or any physical evidence. Until the indictment (and there would have been an indictment) and proceeding trial, he would have sat in jail with an unusually high bond, if any at all. However, this was not just an average citizen, he was a police officer who in a sense would become an example of the police department that he served under. He was one of their own, and for this reason, in their eyes he was exempt from what usually happens when someone commits a felony.

I cannot say that our system is broken per say, but it is often abused by those who work within it. There are so many examples out there, that I don’t even know where to start. Though this might seem petty, I’ll begin with a personal experience of my own. A few months ago, I got a seat belt ticket. Okay, no big deal, this happens a lot. I was however, wearing my seat belt. When I tried to explain this to the officer, he got furious and swore that he saw me put it on after he turned on his lights. The ticket was $250, $190 of that being court costs alone. I managed to beat the ticket by taking photographs of myself in my car while wearing the same shirt, which due to the color, did make the belt hard to see. I also beat it using mathematics, stating that based on my our travel speed, he had less than 0.5 seconds to determine whether or not I was actually wearing a seat belt. So I won, what’s the deal, right? Well, I missed a day’s wages at work for one, not to mention the time I had to take in trying to gather evidence to fight the ticket. Most people would have just paid the ticket, this is what they expect most people to do. The officer had to do nothing to prove that I wasn’t wearing the seat belt, but I had to prove my innocence. Though again, this was a petty example, this same sequence of events happens to people facing much bigger charges every day.

I know a guy named Bob, who was convicted in the late 1970s for felony possession of Marijuana. Because of this, he was not allowed to be in possession of a firearm, even though this particular restriction did not pass law in his state until long after his conviction, nor did his crime involve a firearm. Anyway, he went to a friend’s house one evening where a domestic dispute took place between those who lived in the home. When the Police arrived, they took notice of a rifle in one of the bed rooms of the home. Bob didn’t even know the rifle was there, let alone did he not have possession of it. Nevertheless, Bob was arrested for having access to a firearm. Our constitution states that authorities are not permitted to place Unreasonable bonds against a person, but this didn’t stop them from placing a $50,000 bond on his release. In fact, most bonds are set well out of reach of those who are accused, which is far from ‘reasonable’. He didn’t have this kind of money, so he sat in jail for several months while the District Attorney continued to postponed his trial date. He had several bond hearings, but the bond was never reduced. It wasn’t until nearly six months later at his probable cause hearing, that he was released due to a lack of sufficient evidence. So he sat these months in jail, protesting his innocence the entire time (which seemed to make his jailers hate him even more). When he was released, he didn’t get so much as a Sorry from his jailers or the court. I imagine he could sue for false arrest, but of course, this takes something that would have prevented him from going to jail in the first place, money.

In our country, if you have money and/or power, you can pretty much get away with anything. So in short, we have the rights that where guaranteed to us by the Constitution, but only if we can afford to fight for those rights. Furthermore, we are not innocent until proven guilty, but we are in fact guilty until proven innocent in the eyes of most law enforcement. Police, District Attorney’s and even judges most too often work in Unison, one big happy family. About the only support the accused has is his own defense attorney, and often not only is this not enough to challenge the Government, sometimes this one friend is also closely associated with this family.

There are plenty more examples of abuse by authorities. In Los Angeles some time back, a person in my neighborhood was shot in the back while wearing handcuffs. Recently, there was a bag lady severely beaten by a police officer along a busy highway. I wish that I could say instances like these are rare, but they are far from it. What is rare however, is when an actual police officer or other Government official has to answer for these types of violations.

In Ferguson last night, I saw the protesters that awaited the decision of the Grand Jury. The rioting didn’t start until the decision was passed down to them. Prior to that, the only thing I saw were hundreds or thousands of people, giving the system a chance to work. For many of them, the system apparently failed them yet again based on their own beliefs. Even after this most remained peaceful, leaving only a handful of protesters causing trouble. It’s also worth mentioning that 37 states across the United States are protesting against the Grand Jury decision in Ferguson, indicating this to be a problem that is far more widespread in the Nation than previously thought. This is by no means just an isolated incident as far as Americans are concerned. 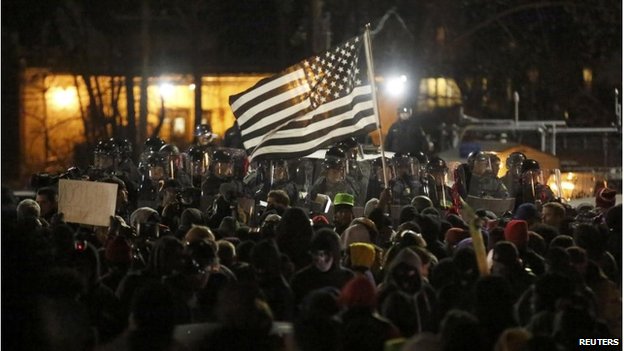 Ironically, for being a free country, our nation seems to have more people in jail, prison or on probation, than any other nation on Earth. Authorities in today’s time need very little reason if any to violate your privacy or other constitutional rights, let alone to place a person under arrest. The media enjoys telling the world when someone is arrested, but fail to mention when someone is found innocent many months after the fact. Sadly, this often destroys a person’s reputation for life.

Little by little, our rights are being taken away from us through fear. Whether it be terrorism, drunk driving, sexual offenses, the war on drugs or stealing cigars from a convenience store, we are exposed to the worst of the high profile cases in an attempt to makes us feel as though we need the Government’s protection. However, with this protection comes a price, a price that many feel is much too high. The people in Ferguson and countless other cities, obviously believe this as well. If we’re going to be told what we should fear, then we should be told of the real threats to our nation, and not just mere illusions. Furthermore, security should be used to secure us from these real threats, and not just be used to justify and satisfy those who are simply on nothing more than a power trip. 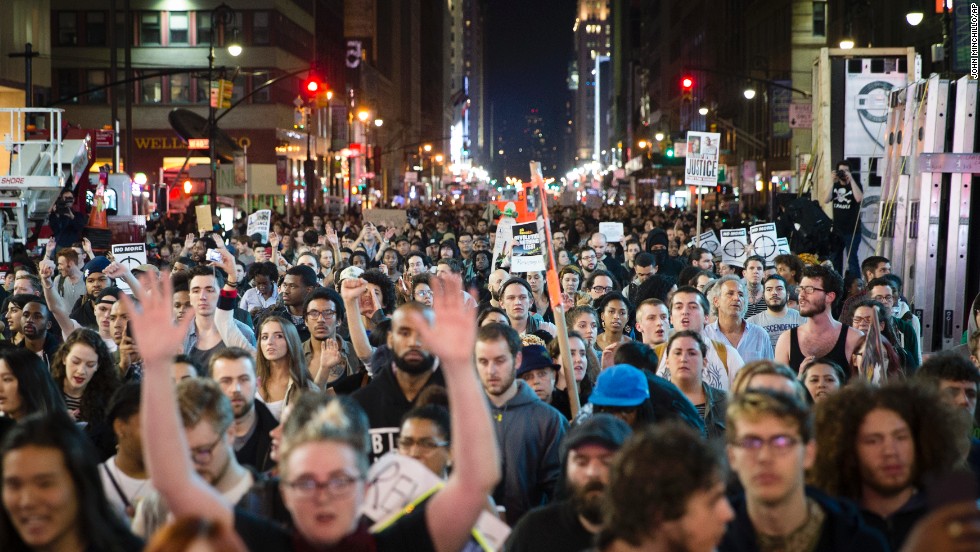 Though Racism may play some role in many of the injustices happening around the nation, I believe that the problem is much larger than that. In my opinion, it’s probably more about corruption and the quest for power over the people in general. Again, I don’t condone using violence as a response to injustice, but many people who are pushed into a corner firmly believe that there are cases where there simply isn’t any other way. What is happening in Ferguson is evidence of this. Thomas Jefferson said it best, The Government should fear the people, the People should not fear the Government. On the contrary, many people really do fear the Government right now, and just maybe they have good reason to be afraid.