Jerry Hicks’ cancer hit the Abraham Hicks follower crowd like a giant water balloon. Some got wet a little, some a lot, and some not at all, but one thing was clear: the news exposed in that soggy bag was not what they wanted you to think it was.

How The Jerry Hicks Cancer Con Got Started

On May 12th, 2011, in an email blast to followers titled Happily Ever After, Jerry and Esther Hicks wrote, ‘We are greatly enjoying our rejuvenating time off, and eagerly looking forward to the next Abraham workshop in Washington D.C.’

This was followed immediately by a segue into a sales pitch: ‘In the meantime, we wanted to let you all know about our newest offering, which is the first episode of a brand new ‘Vortex of Attraction’ series of DVD albums.’ No mention of Jerry Hicks spider bite which, they claimed, had recently forced them to abruptly cancel a workshop, an unprecedented event.

But all was not really well. On May 25th, less than two weeks later, in a startling announcement that detailed, in Jerry’s words, the convoluted and sketchy story of how he had suffered, then dealt with, his ‘spider bite.’ Then, out of the blue, it explained that he had chosen ‘heavy chemotherapy’ among his options for treatment. (Never once mentioned cancer or leukemia, leaving the spider bite out there as the only cause.) He was now in ‘day 18 of a 28 day regimen of bringing my blood counts back into perfect balance.’

In their recent email blast on May 12th, then, when Esther and Jerry Hicks claimed they were ‘…greatly enjoying our rejuvenating time off,’ Jerry was already in day four of his treatment for cancer.

But Jerry Hicks implied he was receiving chemotherapy for either a spider bite or his blood counts, not cancer. Soon, however, numerous people, including immediate family and associates, privately confirmed that he was being treated for leukemia. Was it lying on May 25th or just evasiveness?

Let’s assume Esther and Jerry Hicks were just being evasive. Heck, they were never really upfront about anything, anyway.

But when they claimed they were ‘greatly enjoying our rejuvenating time off, and eagerly looking forward to the next Abraham workshop,’ now that was lying.

New: Jerry and Esther Hicks’ Spiritual Money Tree, Stories Behind the Abraham-Hicks Teachings and the Law of Attraction

Why Lie About Jerry Hicks’ Cancer?

Lying about Jerry Hicks illness was necessary to keep customers ponying up for tickets. Telling the truth would mean admitting that the famous ‘teachings of Abraham’ were, on this critical issue, a sack of baloney intended to give paying followers easy answers for troubling dilemmas.

Esther Hicks, many times, standing up on stage, barefoot, in her Abraham persona, told audiences how we give ourselves illnesses, especially cancer, by thinking about them. In 2002 in San Rafael, California, Esther (on stage as Abraham) said this:

‘Illness or pain is just an extension of negative emotion. When you are no longer feeling any resistance to it, it’s a non-issue.’

How could Jerry Hicks, having heard the pitch a zillion times and having 24X7 access to Abraham, have given himself cancer, especially a virulent version of leukemia? More important, why didn’t he use one of the easy methods taught by Abraham to rid himself of it?

Obviously, there were questions Jerry and Esther Hicks did not want to answer and never have. Just before Jerry Hicks died, Esther finally conceded that he’d been battling cancer, after leaving the excuse-making to the legion of sock puppets for six months. She never talked about the core issues.

How could Esther and Jerry Hicks dodge the implications of this quote from a 2003 workshop in Boston:

‘We could take an example of the person who is noted by medical doctors to be the sickest of the sick, and if we could hold them in suspended attention for an afternoon, their diagnosis would change.’

If Esther and Jerry Hicks were themselves followers of the teachings of Abraham that have earned them millions, why didn’t they just spend an afternoon in ‘suspended attention’ with Abraham and be done with it. Who needs chemotherapy? Jerry Hicks’ ‘diagnosis would change’ in an afternoon with Abraham!

The reason they took the chemotherapy option was that they knew it to be their best choice and that what they’d had been selling from Abraham all these years was hogwash.

There is no way of knowing, given the Hicks’ honesty gap and unwillingness to talk straight at any time, when they knew it was hogwash, but fortunately, it was in time to save Jerry Hicks from the terrible guidance they’d unapologetically given others. 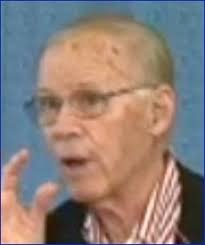 Here, of course, I am talking about treatment for the loss of business Abraham Hicks Publications has suffered as they launched their bid to dodge the implications of Jerry Hicks’ illness, tactics that in no way improved their standing in the spiritual community.

Not so sure about this, but Abraham Hicks has announced suspension of their heavily promoted Abraham LIVE Internet broadcast, without explanation. They are just off as are, for now, workshops after December 4th and all cruises. Staff has been reduced. It may turn out that the cure for Jerry Hicks cancer is, really, the upcoming death of Abraham Hicks.

Note, for those who stayed tuned: Jerry Hicks died on November 18, 2011, according to Esther Hicks, presumably from cancer, but not openly disclosed. The interesting thing is that, now that his battle with leukemia is over, it’s finally clear that Esther and Jerry ignored the teachings of Abraham. The operation couldn’t afford to risk exposure to a failure.