Raymond Francis, M.Sc., is not afraid of cancer and he tells us we shouldn’t be either. As author of Never Fear Cancer Again, he explains that this disease, which kills more than 585,000 American every year, can be turned off, if people remove the factors causing malignancy. Cancer, he explains, is also largely preventable.

This researcher also believes that statistics have been massaged, so that we’re being led to believe that mainstream medicine is much more effective at curing cancer than it really is. Francis is no fan of conventional treatments, which will not resolve malignant lung, breast, liver, prostate and colon cancer.

So, what do we need to do, to keep ourselves free of cancer, or reverse it if we receive an unfortunate diagnosis?

First of all, Francis explains that the Standard American Diet is a very unhealthy one. Sticking to it may put you at a higher risk for developing a malignancy, he notes. 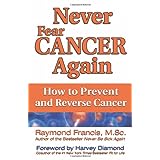 Another problem plaguing modern society is environmental toxins, according to Francis. Adding fuel to the fire is stress, lack of sunlight (Vitamin D is critical to a well-functioning immune system) and insufficient sleep.

The book points out that some medical treatments can also increase the likelihood that abnormal cells will grow to the point that a tumor is diagnosed.

One important message that Francis delivers in this book is that we don’t have to live in fear of cancer, which isn’t as mysterious as we’ve been led to believe. This is not a disease that strikes at random, out of the blue, Francis notes.

Another vital piece of information is that some doctors already know a great deal about cancer prevention, and even how to ‘reverse’ the disease once it hits. However, most people have no idea that the solution for cancer is not something we need to strive for. This goal has already been accomplished, he says.

Francis writes from the perspective of a survivor. Back in 1985, he almost lost his life from an antibiotic, which caused his liver to fail. Despite the fact doctors said nothing more could be done, Francis threw himself into research.

He discovered the body has the remarkable ability to heal itself when given the right tools.

Disclaimer: This article is presented for information only. People with health concerns should discuss them with a medical professional. The author assumes no responsibility for treatment decisions or outcomes.