Over the passed few days following the United States casting blame on North Korea for a the hacking of Sony Corporation, a series of Denial of Service attacks just happened to hit the isolated Nation. Today it hit the news that North Korea’s internet went down for over nine hours. This comes almost immediately after President Obama said that the United States would deal a “Proportional Response” to the attack on Sony’s servers.

‘We aren’t going to discuss, you know, publicly operational details about the possible response options or comment on those kind of reports in anyway except to say that as we implement our responses, some will be seen, some may not be seen,’ State Department spokeswoman Marie Harf said.

North Korea’s Internet access is very limited, only a handful of persons actually have internet access, most of them being Government or Military Officials. In addition, there is only what could be called a very narrow list of ISP’s that provide North Korea with internet access, all going through China. This being the case, there is always the possibility that this was caused by nothing more than a glitch, after all that limited line of access does have its ups and downs. But even if this is the case, the frequency and scale of this outage indicates that this outage may have been more deliberate.

Some believe that the attack against North Korea’s infrastructure was a deliberate attack from the United States, and at a glance it may look that way based on how the United States Government responded to the attacks on Sony. Then again, this could have also been a private patriotic group or individual who did all this on its own. Granted the attack caused an entire nation to lose Internet, but doing so to this particular nation wouldn’t be all that difficult given North Korea’s limited Internet infrastructure.

‘Usually there are isolated blips, not continuous connectivity problems. I wouldn’t be surprised if they are absorbing some sort of attack presently,’ Doug Madory, director of Internet analysis at Dyn Research, said when the Internet was down. 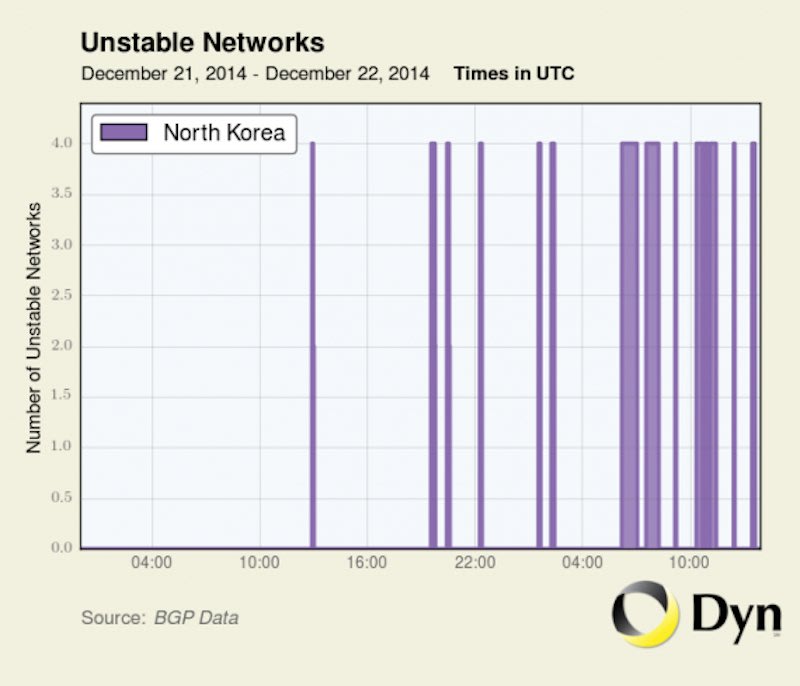 I would imagine that most are assuming that the attacks were a response from the U.S. Government. This is at least reasonable considering shutting down a nation’s internet might be considered a “Proportional Response” and it might even be enough to make North Korea’s leader think twice about any future attacks against servers on American soil. This could not have been an attack at all though, since we know that the United States has asked China to aid us in a response to North Korea. This means that it’s also possible the United States asked China to simply throw the switch feeding North Korea’s Internet for a few hours. In either case, while North Korea’s leader likes to make threats against the United States, our saying that, “We can shut down your entire Internet in the blink of an eye” might make for a solid deterent.

If this was the result of an American angered over not being able to see the movie, ‘The Interview’ then I don’t see the United States bending over backwards to find and prosecute the individual given our current relations with North Korea. Given what I said earlier about the North’s internet infrastrure, an individual attack would not be hard to perform, and may even be the more likely cause of the blackout.

‘If it is an attack, it’s highly unlikely it’s the United States. More likely it’s a 15-year-old in a Guy Fawkes mask.’ – Matthew Prince, president of CloudFlare

Regardless of whether this was a Government attack/favor, a small group/individual or just a glitch, North Korea’s leader is sure to blame the United States for the outage. Then again, they could claim that they themselves caused the outage to protect their own servers from an American attack. Given the frenquency of DDoS attacks in recent days however, this seems about as likely as it being the result of just a glitch.

In the meantime, the Web is not only speculating, but it is also cracking jokes against North Korea. Social Media has released a wave of comments ranging from North Korea simply, ‘Needing to turn the router off for ten seconds,’ to ‘South Korea finally getting around to changing their WiFi passwords.’

What happens in the days ahead should be interesting to say the least.