Omkari Panwar , the oldest mother who gave birth to twins  a son (at last) and a daughter. The 70-year-old grandmother lives in the northern state of Uttar Pradesh with her 77-year-old husband Charan Singh Panwar.

I am very happy said her husband, a retired farmer who always wanted a male child. God did not bless us with a male child, but now we are very grateful that God has answered our prayers he said. The couple already have two grown-up daughters, but were so desperate for a son and heir until two of them spent their life savings and took out a bank loan in order to pay for their IVF treatment which cost about 350,000 rupees. The farmer even sold his buffalos and mortgaged his land.

The twins, a girl and boy both weighing 2lbs, were delivered a month earlier by Caesarean section. Omkari Panwar and her husband, who are also the grandparents to five children said that the twins are Gods greatest gift to them. Despite concerns over their low birth weights, the doctors said the twins were doing fine.

Mrs Panwar, who has no birth certificate used the date of her countrys independence, 1947 to gauge her age. What she remembers that she was nine when British left India and it means she is 70 at the time she gave birth. In 2005, Romanian Adriana Illiescu, age 66, became the worlds oldest mother who gave birth to a daughter through IVF and now Mrs Panwar had broken that record.

During the interview, Singh was reluctant to speak because the farmer has received unpleasant publicity for his wifes having babies at such an advanced age. Many people in his village didnt even support his risky decision. 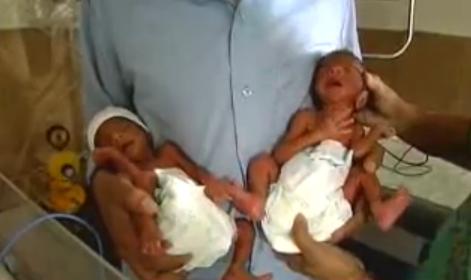 Boys are highly valued in India, particularly in rural areas. It is believed by the Hindus that death rites should always be performed by the closest male relatives and this has made a male heir especially important. Another advantage of having a male heir is that, many Indians still practice the dowry system (although it is officially banned in India), making daughters a more expensive proposition.

It is very common to abort female fetuses in India, although revealing the sex of a fetus to pregnant parents is illegal. In certain states in India where female abortion rates are high, the government chooses to pay parents there to raise and educate daughters so that the male-to-female ratio can be balanced.

Talking about baby gender, Baby Gender Predictor chart was found in China and is said to be very accurate. The basic principle of Feng Shui Children’s Bedroom is also very popular and widely used by the Chinese people to improve or enhance the prosperity and health of their children.