Paucity of movement can affect any activity and is
best measured by assessing aspects of daily living.

often asymmetrical at onset,It persists ,throughout the range of motion of any affected Joints

occurs at rest, at
a frequency of around 34 Hz, inhibits during a skilled activity. A faster, postural tremor of around 68 Hz is sometimes evident initially at a time when the rest tremor is absent. The rest tremor most commonly involves the upper limb, producing either flexion/ extension movements or pronation / supination, or a combination of these 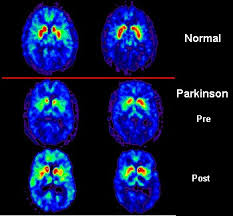 There are potentially several stages during the synthesis, release and metabolism of dopamine within the central nervous system at which
intervention, by enhancing dopamine levels, may influence the clinical manifestations of Parkinsons disease

Dopa is converted to dopamine within the dopaminergi neuro The dopamine is then transported into storage vesicles before being released, through depolarization and entry of calcium ions