Do you know where the water goes when you flush a toilet or empty a sink? Every time you flush your toilet or wash something down the sinks drain, you are actually creating sewage or wastewater. If your home is located in a city, this wastewater will go into a municipal sanitary sewer system then to a sewage treatment plant.

In rural areas, there is no sewer system for houses that are spaced so far apart because it would be too expensive to install. Because of this, people install their own, private sewage treatment plants called the septic tanks. Their wasterwater is treated by a septic system or also called as onsite wastewater system. This system will treat your sewage right in your own yard and release the treated effluent back into the groundwater.

What is a Septic Tank

A conventional septic system is mainly composed of a septic tank and a soil filter that is commonly called a leaching bed. A leaching bed is also called as an absorption field, a tile field or a drain field. A septic tank is a large concrete container under the ground for holding human waste from toilets. In the past, this container was sometimes made of wood or steel. Wastewater flows from the sewer pipes in your house into the tank or container at one end and leaves the container at the other. The body of water in the container contains harmful bacteria and chemicals such as nitrogen and phosphorous that act as fertilizers.

Since the organic material in the wastewater is broken down by bacteria and as a result this process produces gases which dont smell good. To prevent these gases from flowing back into your house, people create sinks with loops of pipe called P-traps used to hold water in its lower loop and block the gases. The gases will instead flow up a vent pipe that you often see at the roof of any house.

The purpose of the septic tank is to seperate liquids from solids as well as to provide some breakdown of organic matter in the wastewater. Water flows down from your house to the container or tank under ground and down from the container to the drain field. A septic system is normally powered by nothing but gravity. 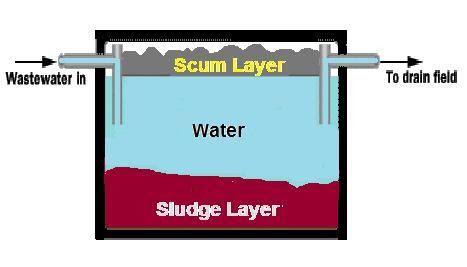 As wastewater from your house enters the tank, its velocity slows allowing lighter materials to float to the surface and heavier solids to settle to the bottom. The accumulation of lighter solids which form a mass on the surface of the tank is called scum while the accumulation of settled solids at the bottom is called sludge. Anaerobic bacteria in the wastewater will digest some of the organic solids in the tank and clarified wastewater in the middle of the tank will flow by displacement into the drain field for further treatment.

What is a Drain Field

A drain field is made of long perforated pipes buried in trenches filled with gravel. It uses natural processes to treat the wastewater from your septic tank. A typical drain field pipe is 10 centimeters (4 inches) in diameter and buried in a trench that is about 1.5 meters (4 to 6 feet) deep and 0.6 meters (2 feet) wide. The gravel fills the bottom of the trench and dirt covers the gravel. The water is absorbed very slowly and filtered by the ground in the drain field. There are different sizes of the drain field used and the size is determined by how well the ground absorbs water  the slower the ground absorbs the water, the bigger the size of the drain field. 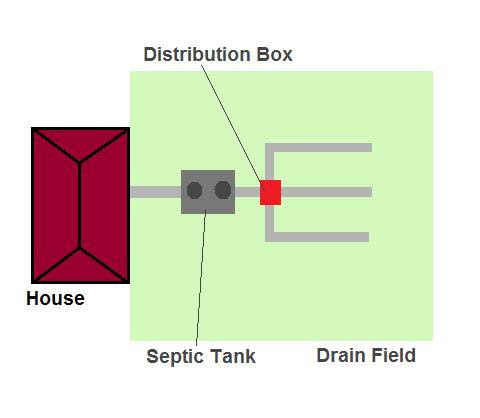 Wastewater contains contaminants such as solid and dissolved organic matter (carbon compounds), nutrients (phosporus and nitrogen) and harmful viruses and bacteria. A biomat layer (a slime layer of bacteria) forms at the sidewalls and bottom of each distribution trench  it is in this layer where much of the treatment takes place. The organic matter in the wastewater is consumed by the bacteria in the biomat layer and surrounding soils, the ammonia nitrogen (which is toxic to certain aquatic species) is also transformed to the less toxic form of nitrate-nitrogen. Harmful bacteria and viruses are largely removed in the drain field through predation (eaten by other microbes), filtration and environmental exposure.

In recent years, more and more people choose to improve their home by using ancient art of Feng Shui such as feng shui toilet and feng shui kitchen.