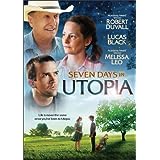 ‘Seven Days in Utopia’ is an inspirational movie about golf and the things that matter more. The golf drama features a stellar cast including Robert Duvall, Lucas Black, Deborah Ann Woll and Melissa Leo.

Based Upon Golf’s Sacred Journey: Seven Days at the Links of Utopia

Based upon the 2009 book ‘Golf’s Sacred Journey: Seven Days at the Links of Utopia’ by Dr. David Lamar Cook, ‘Seven Days in Utopia’ the movie follows the career of up-and-coming golfer Luke Chisholm who has just had a very public meltdown on the golf course.

Finding Oneself in Utopia

After watching his overbearing father walk away from him on the golf course, Chisholm has another emotional and automobile breakdown when he almost runs into a bull in the middle of a Texas back road. The ‘accident’ lands Chisholm in the small town of Utopia, Texas, where he is found by eccentric Johnny Crawford a rancher who has built a golf course out in the middle of nowhere and who doesn’t believe in accidents.

Crawford challenges Chisholm to spend the week with him while his car is being fixed to allow Crawfrod to teach him some different golf techniques that will help Chisholm his game back. What ensues is a chapter straight from ‘The Karate Kid’ movies and ‘Star Wars’ where Chisholm feels like he is wasting his time learning things that appear to have little or nothing to do with golf. However, what Crawford is really teaching Chisholm is to ‘See it; Feel it; Trust it.’ Crawford helps Chisholm get out from under the bondage of his father’s relentless instruction and into the proper enjoyment and expectation of the game. 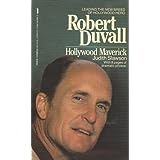 Robert Duvall commented on why ‘Seven Days in Utopia’ appealed to him saying, I was attracted to this because its a great tale about a mans journey, and about how you survive lifes unexpected curve balls.

In addition to several Hollywood stars, ‘Seven Days in Utopia’ features PGA of America pro golfers such as K.J. Choi and many other celebrity golfers in addition to a new recording of the hit song Born Again by Christian artists Third Day.

The movie draws an analogy between golf and faith with golf being more or less a metaphor, sometimes a somewhat muddled metaphor, for Christianity. While ‘Seven Days in Utopia’ is a bit clumsy in a couple of scenes, overall the story is good, the acting substantial, and the entertainment value solid. Throw in the fact it is a family-friendly movie with strong values, and I would recommend it highly.

Robert Duvall and Lucas Black recently teamed up for the movie ‘Get Low.’ ‘Seven Days in Utopia’ starring Robert Duvall, Lucas Black, Deborah Ann Woll and Melissa Leo will be available on DVD at all major retailers on Nov. 29, 2011.

Anna Karenina: the book vs. the movie

Anna Karenina: the book vs. the movie

Hugo: The movie which left a great impact on my mind.

Make Money From Your Articles Turn Them Into YouTube Videos