A mysterious alien, Klaatu (Michael Rennie), and his indestructible robot land on Earth in Washington D.C., capturing the attention of the world in ‘The Day the Earth Stood Still’ (1951). Although Klaatu claims to be on a mission of goodwill, a device he intends as a gift for the President is mistaken for a weapon and Klaatu is shot. When he refuses to reveal his mission to any single government, the military, politicians, and millions of ordinary people wait in fear to discover why Klaatu has come to earth.

The fate of the world is at stake as the distrust of the people leads to calls for violence against the alien. However, after young widow Helen Benson (Patricia Neal) and her son befriend the alien (who is in disguise), Helen comes to realize that they may be all that stands between the human race and alien annihilation.

Directed by two-time Academy Award®-winning director Robert Wise (The Sound of Music, West Side Story) and starring Oscar®-winner Patricia Neal (Hud) and Michael Rennie (Les Miserables), this classic movie from 1951 has been hailed as one of the most influential and thought-provoking science-fiction films of all time. 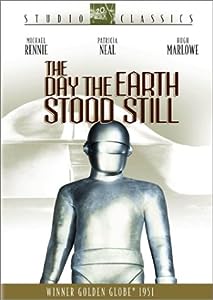 Many people are surprised to learn that ‘The Day the Earth Stood Still’ is special to lovers of Mayberry, because actress Frances Bavier who played Aunt Bee on ‘The Andy Griffith Show’ was one of the movie’s co-stars in her role as Mrs. Barley. Other alumni from ‘The Andy Griffith Show’ include Hugh Marlowe (Tom Stevens – Helen’s boyfriend) and Olan Soule (Mr. Krull – another boarding house resident).

They say imitation is the sincerest form of flattery, and Hollywood is great at imitating what it likes. ‘The Day the Earth Stood Still Special Edition’ was released to tie in with the theatrical release of its 2008 remake which starred Keanu Reeves (The Matrix) and Academy Award® winner Jennifer Connelly (A Beautiful Mind).