Do you remember the Jonas Brothers? In 2009, the three most popular brothers in America brothers rocked out in 3-D only on Blu-ray in their first motion picture, ‘The Jonas Brothers: The Concert Experience – Deluxe Extended Movie’ from Walt Disney Studios Home Entertainment. Up Close and Personal brought fans closer than ever to Kevin, Joe and Nicks world. Who knew they would be on hiatus a year later and then break up as a band in 2013? But now you can experience The Jonas Brothers in all their glory once again!

Relive all the teenage magic of The Jonas Brothers 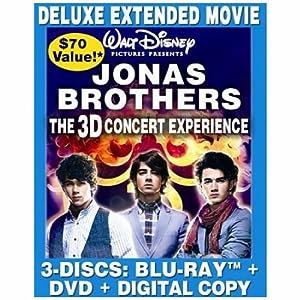 As the Jonas Brothers and their band prepared for their live sold-out concerts all over the world in 2009, they offered their fans a backstage pass to see the Brothers perform in their living room!

‘The Jonas Brothers: The Concert Experience’ opens with the boys asleep in bed at the Trump Plaza Hotel in New York City at 4:00 AM. The JoBros are awakened and start their morning planning their day around an early-morning breakfast. Cut to the Jonas Brothers in a limo, stuck in the famous New York City traffic. Hemmed in by cars and taxis, the trio are discovered by the hoards of teenage girls who roam the streets of NYC. Since the Jonas limo inexplicably does not have tinted windows, the girl herd can easily see them and quickly has the brothers surrounded. The Jonas brothers climb out through the sun roof and leap from limo to car to cab as they rush to a helicopter pad.

Full of pyrotechnics, shots of New York City, and special guests like Demi Lovato and Taylor Swift, The Jonas Brothers: The Concert Experience – Deluxe Extended Movie DVD showcases the talent, enthusiasm and wholesome good looks that have made the Jonas Brothers teen superstars. Four songs are included that were never seen when the movie played in theaters, including two integrated into the film itself, extending the experience.