Exactly how popular had the Merc with the Mouth, otherwise known as Deadpool, become as a pop culture icon since his appearance in the early days of X-Force? Not only was he given a comic book series of his own later on, the mercenary will even be getting his own movie in the near future as a spin-off from X-Men Origins: Wolverine. Not exactly as good-looking as Ryan Reynolds, who played the role of the mercenary in the latter movie, and will most probably be reprising the role in the former, the Merc with the Mouth had certainly been a lot of things, even a pirate at one point, and it was only a matter of time before anyone started seeing action figures sculpted in his awesome likeness. 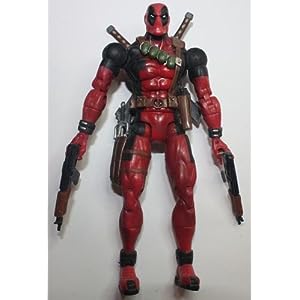 Due to its rarity, the Marvel Legends Series 6 – Deadpool Action Figure is priced at $199.99 on Amazon, and to further justify its ludicrous price, It’s also probably one of more well done Deadpool figurines out there, courtesy of Toy Biz. The action figure comes with a number of weapon accessories (assault rifles, katanas, a pistol and a sai), all of which can be held by it as depicted by the image above. You can adjust the way he looks: with his red-and-black mask on or without it, by simply switching his regular masked face out with a spare head, one so twisted by the horrors of the Weapon X program. With around 30 points of articulation, the figure can be adjusted to act out all the poses to your heart’s content and on a stand that comes with it, alongside a Doop figure and an additional Deadpool Issue #4 (1997). The only downside that people keep mentioning is that the figure’s body mold is a rip-off from Daredevil’s and the Silver Surfer’s, which I think is a somewhat minor issue relative to the overall awesomeness of this Deadpool action figure. 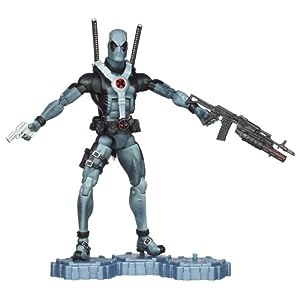 While it isn’t accompanied by as many weapon accessories as the Marvel Legends 6” Deadpool figure, the Marvel Class Legends 6” Deadpool Action Figure is available in two different uniforms: Deadpool’s standard red-and-black, and the black-and-white suit he sported during his tenure as a member of the Uncanny X-Force led by Wolverine. Unfortunately, you don’t really seem to have much say in which uniform you want this Deadpool action figure to arrive in on your doorsteps, only one of the few annoyances customers face, as there seems to be more demand for the standard red-and-black than its black-and-white counterpart, and one of the reasons behind it was that the latter variant’s rifle accessory lacks the Deadpool logo that can be found on the standard Deadpool uniform’s. 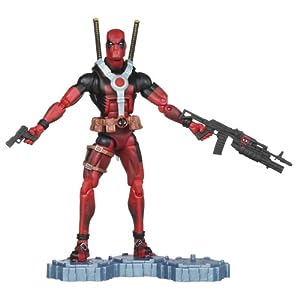 Other gripes about it include difficulties in making the figure stand, and tight joints. While paling in comparison to the Marvel Legends 6” figure, it makes for a great addition to any Uncanny X-Force collection, alongside other team members namely Wolverine, Archangel, Psylocke and Fantomex. 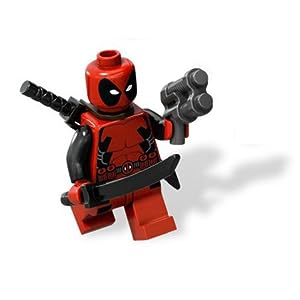 Enter LEGO Deadpool, world’s tiniest mercenary. It comes with two LEGO weapon accessories: a double-barreled gun designed to fit LEGO Deadpool’s grip, and a pair of black plastic katanas, both of which can be sheathed through two slots of a plastic harness that LEGO Deadpool carries on his back. Like any other LEGO figure, LEGO Deadpool’s body can be separated into three segments, which, like the original Deadpool and his awesome healing prowess, can be fitted back together as well. Priced at $14.77, the LEGO Deadpool minifigure is available on Amazon, and in the near future, will probably be seen running rampant in an upcoming LEGO Marvel Superheroes game.