There are venture capital firms who has some of their investments tied up for programs that are trying to resolve medical problems that can be seen as vitamin D deficiency symptoms. Doctors and scientists have the same responsibilities as other professionals who are attempting to make innovative changes. They need other peoples money to help out with the funding of medical treatment programs. Venture capital firms are a good source of individuals willing to risk a large sum fo their money for a chance to be beneficiaries of large rewards.

Investment Accelerator Fund – Life Sciences (IAF-LS), a fund of the province of Ontario, Canada, has committed one million dollars to invest in Cytochroma, Inc.s development of CTAP101 Capsules. MaRS should also get credit since it delivers IAF-LS. At the time of the deal, CTAP101 Capsules was in Phase 2b study to help nephrologists find a treatment for secondary hyperparathyroidism. Patients with non-dialysis chronic kidney disease who are also experiencing secondary hyperparathyroidism are targeted for having connection with vitamin D deficiency symptom. [1]

Cytochroma is a specialized pharmaceutical company that is committed to developing and commercializing proprietary products to take care and prevent disorders that are associated with vitamin D deficiency. The President and CEO of Cytochroma, Charles W. Bishop, MD was quoted saying the company is committed to decrease the rates for death and illness occurring among the larger chronic kidney disease patient population. CTAP101 Capsules has been formed with the intention to be dependable on raising serum total vitamin D pro-hormone concentrations to levels of 30ng/ml or higher. Researchers are working for the product to simultaneously lower the risk of side effects connected with various other treatments for vitamin D deficiency. [1]

The metabolomics field of metabolomics has advanced due to Metabolon, Inc.s capability to develop products that measures and represents all [2] of the

biochemicals in a biological sample through its proprietary global processing method. [2]

By inputting and explicating data, metabolomics let researchers comrehend the disease etiology and drug action. It also can do a better job than genomics and other approaches to provide more appropriate personalized medicine. [2]

Metabolon, Inc. announced on July 6, 2011 that it is offering a tandem mass spectrometry (LC/MS/MS) test. It is being run in Metabolon laboratory in Research Triangle Park, North Carolina, United States. The purpose of the new test, which is available for patient testing is to detect vitamin D deficiency. It is imperative to be able to detect inadequate levels beofre the amount remaining is reduced to deficient zones. Serious health issues such as rickets and osteomalacia, which are bone-related diseases, may arise. Studies are currently being conducted to find out if autoimmune diseases, diabetes, and hypertension have valid connections to the deficiency of vitamin D. [2]

Metabolon, Inc. is seeking to receive accreditation by the College of American Pathologists (CAP). It is important for the corporation to be recognized by CAP because that organization is globally value as the first-rate standard for clinical laboratory quality. The CEO of Metabolon, John Ryals, wants his corporations high-complexity CLIA registered laboratory [2] to

allow physicians to more efficiently and effectively diagnose and devise personalized treatment regimens for patients at risk for the condition and its consequences. [2]

as the number of patients who are vitamin D deficient continues to increase in the United States. Also, just applying to be reputable strengthens the corporations willingness to provide superior quality while pursuing the capability to furnish personalized medicine. [2]

Receptor Therapeutics is facing the challenge of getting financing from investors so it can begin to start clinical trials, which can start in less than six months. The CEO of the corporation, Joseph Elliot, MD, states that about half of the worlds population is vitamin D deficient. He continues on and states there is evidence from epidemiologists that the incidence of osteoporosis, cancer, and a number of acute and chronic diseases are influenced by reduced amount of vitamin D in individuals. It is indeed very possible to find that vitamin is associated with diseases involving growth regulation or immune system. [3]

High pulsatile doses of vitamin D right before a chemotherapy session resulted in positive outcomes. Researchers Thomas Beer at the Oregon Health and Science University and Candace Johnson and Donald Skip Trump at the University of Florida were the ones responsible for the finding. Those three doctors became members of Receptor Therapeutics Scientific Advisory Board after they negotiated a licensing deal with the company. [3]

Donald Trump, MD has already finished a Phase 1 study with generic calcitriol. Joseph Elliot, MD, states Trumps study will move into Phase 2 clinical proof-of-concept studies while his company will attempt to develop a new formulation of calcitriol. Joseph also said it will take about two years to see if it is possible to create a workable generic brand. They will try to monetize the product after a bridging study is done with proprietary formulation. [3]

Receptor Therapeutics was created in 2008 after a venture capital, Growthworks, asked Joseph Elliot, MD to form a second virtual company. They were comfortable with him because it is one of Aegeras investors. They gave him monetary funds to set up a company that outsource some tasks and keep the departments that cant be outsourced in-house. [3] 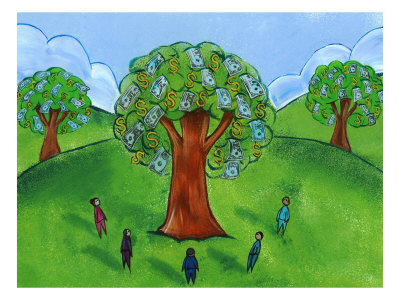 The business model for Receptor Therapeutics stress low-risk development, high potential recompensation and a transparent exit. The two programs that the company is working hard on involve approved drugs that are meant to be given in a nontypical way. Finally, Receptor prefers to monetize the programs through either an out-licensing arrangement, selling the company, or even forming a partnership. [3]

Collage of One Hundred Dollar Bills by Paul Katz

The medical industry could use more people with ties to venture capital firms to assist in finding ways to help out people vitamin D deficiency symptoms.