‘West Side Story: 50th Anniversary Edition’ released in Blu-ray and DVD on November 15, 2011 from Twentieth Century Home Entertainment. The prettiest boy gangs ever seen on the streets of New York start the movie classic with an interminable 15-minute opening dance number. Fortunately, the movie gets better. 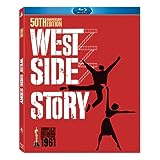 Twenty-three minutes into ‘West Side Story: 50th Anniversary Edition,’ we meet Tony (Richard Beymer, ‘The Longest Day’) and the action finally begins. A half hour in Maria (Natalie Wood, Splendor in the Grass) makes her entrance which is where the movie really starts.

The Jets (whites) have planned a rumble with the Sharks (Puerto Ricans) at a local dance. Thirty-nine minutes in, after some tedious dance numbers, Maria (whose brother is the leader of the Sharks) sees Tony (formerly of the Jets) across the crowded dance floor. They dance to a perky instrumental version of ‘Maria’ and fall in love.

The movie picks up here and some of the best songs in musical theater ensue: ‘Maria,’ ‘America,’ Tonight, I Feel Pretty,’ ‘Make of Our Hands’ and ‘There’s a Place for Us’ — timeless songs which are as popular now five decades after its historic debut as they were 50 years ago — songs that are still a part of American pop culture.

The ageless film is a retelling of the story of Romeo and Juliet set against a backdrop of racial gang warfare in 1950s New York. Full of romance, music, drama, tragedy and too many dance scenes, ‘West Side Story: 50th Anniversary Edition’ is based on the hit Broadway musical of the same name.

Winner of a record-breaking ten Academy Awards® including Best Picture, Best Directing and Best Original Score, the film took home more awards than any other movie-musical in the history of cinema. Featuring classic lyrics from American composer Stephen Sondheim, and a score from Leonard Bernstein, ‘West Side Story: 50th Anniversary Edition’ boasts hundreds of hours of restoration, new 7.1 digital audio, and a collection of bonus features spotlighting the songs and dances of the original film.

A long runtime of 153 minutes makes it tempting to fast forward through the first 23 minutes of ‘West Side Story: 50th Anniversary Edition’ and enjoy the last two hours.