Sodium fluoride is routinely added to our public drinking water at great cost, both in terms of dollars and in health.

There is ample evidence this chemical can cause or exacerbate a number of conditions, such as arthritis, thyroid disease, kidney problems and cancer.

A growing number of communities are saying no to this potent toxin, but it’s still found in 70 percent of the municipal water supplies in the United States.

Why anyone would want to drink fluoridated water is beyond comprehension. Citizens are also footing the bill for this controversial policy. People in many cities and towns across America are being assessed tens of thousands of dollars a year in excess taxes to fund this added chemical, which can lead to chronic health issues.

The Fluoride Action Network (FAN) is a consumer group that’s been at the forefront of trying to raise awareness of the risks of consuming this industrial byproduct, allegedly added to drinking water to prevent dental cavities. The FAN advisory board is made up of a number of independent scientists.

Here are some of the leading sources of sodium fluoride, as well as suggestions on how to reduce your exposure.

Most municipal water supplies throughout North America have fluoridated water. This isn’t true in Europe, where only three percent of the tap water contains this chemical.

Inexpensive water filters, such as pitchers with a filter attached, do not remove fluoride. You’ll need either an under-the-counter reverse osmosis filter or a counter-top model with the same technology.

If you’re thinking of purchasing a filter, and it’s not advertised as able to remove fluoride, it’s probably safe to assume that it doesn’t. In our home, we use a Tap Master Jr. Counter Top filter, because it contains activated alumina that removes the fluoride, as well as other contaminants. 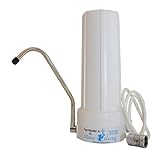 Bottled spring water is another option.

Most commercial toothpaste is fluoridated. Even some of the all natural brands contain this ingredient. You’ll have to shop carefully for a brand that doesn’t have fluoride. We use Nature’s Gate toothpaste that we order from Vitacost.

Topical fluoride application results in mass consumption of this prevalent poison. Discuss alternatives with your dentist.

Soda in and of itself isn’t the healthiest option, regardless of whether the water used in the bottling process contains fluoride. Most canned and bottled beverages are constituted from regular tap water, which is highly likely to contain fluoride. Even if a product label says it’s made from filtered water, it doesn’t mean the fluoride is removed.

Black tea contains a surprisingly high concentration of fluoride. If you’re trying to consume less, you may also have to cut back on your tea drinking. Fortunately, it also contains other health-promoting substances that can counter the effects of the fluoride.