With all the other super heroes having their own movies, it’s now time for Wonder Woman, who will finally make an appearance in 2016 in a movie called, Batman vs Superman: Dawn of Justice. She will be portrayed by Israeli actress Gal Gadot.

This super hero made her first appearance in the comic books, and the character is suppose to be an Amazonian warrior princess. In her homeland she is known as Princess Diana of Themyscira, but her secret identity is Diana Prince.

This warrior princess also has a wide range of superhuman powers and superior combat and battle skills. She also has an arsenal that rivals the likes of Tony Stark as Iron Man. These include: the Lasso of Truth, a pair of indestructible bracelets, a tiara which serves as a projectile, and an invisible airplane.

This particular Wonder Woman costume will include the dress, the collar with cape, the headband, the bracelets and the boot tops. Please make note that they are boot tops, not boots. 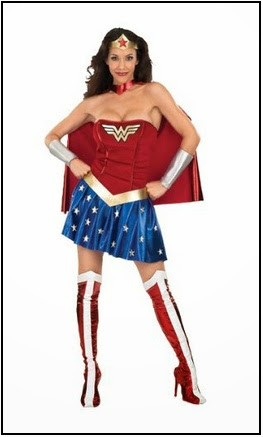 Are There Other Costumes
You can also purchase a sexier version of the costume that comes with a pull-up romper that has golden lamé detail, a lasso loop, the golden lasso, and the matching star embroidered head band. This outfit is similar to the one she wore in the TV series.

There is also a girl’s costume that includes the dress with cape, the silver gauntlets, the head piece, the red and white boot tops, and the gold belt. Please note that the size small has an attached cape, but the medium and large sizes have a separate cape. The girl’s sizes are small, medium and large.

If you want to dress your toddler as Wonder Woman, then you can buy this costume in sizes 2 to 4, and it includes the dress with the attached cap, boot tops, bracelets and the headpiece

We can’t forget the smallest member of the family, so this outfit also comes in sizes 6 months to 12 months. This one piece costume includes pants with an attached tutu, headpiece and booties.

Some of the comments made about this costume included the sizing being too large, and the accessories being too small, the quality of the material, fading in the back, the zipper pulling away and the skirt being too long.